Aristotle once said, “We are the sum of our actions, and therefore our habits make all the difference.”

Simply put, having the wrong habits can be the difference between success and failure in life…

Because habits define who we are at a core level.

And who we are, our value so to speak, is what women truly care about.

This certainly applies to relationships and game on a major level. In many ways, how women judge your value is a result of the habits that you unconsciously repeat on a daily basis.

You have to be AWARE of your bad habits before you can change them.

And frankly some are not as obvious as others.

From coaching thousands of students, and once-upon-a-time making the same mistakes myself, I’ve noticed several that really keep guys stuck.

(BTW, I’ll be diving into these, as well as almost everything else you’d want to know about High Value in my upcoming special event: Value Masterclass).

In this blog, I’ll focus on the top 5 low-value habits, as well as how to replace them with high value habits ASAP.

Men are destroyed by the same old thought patterns.

The wrong habitual thoughts can lead to feelings of fear, inadequacy, and frustration – all killers when it comes to attraction.

These emotions pummel you into inaction.

Not even trying to attract women is a surefire way to keep them OUT of your life.

When I was in college, I was worried about getting bad reactions from women.

I didn’t want to make a bad impression on them, so I was too scared to take risks.

I was even too afraid to flirt!

But how did I get over my fear of bad reactions?

By forcing my mind to reach beyond my comfort zone and actively taking INCREMENTAL RISKS.

I got comfortable with flirting… by flirting.

This is the paradox of being frightened into inaction. You feel too scared to act even though taking action will reveal there’s nothing to be afraid of.

The solution is to take it slow.

Get out of your mind and into action, incrementally.

If you have approach anxiety, go up to a girl and say, “hi.”

That’s it. You approached a girl. Well done. Anything beyond that is gravy.

Give yourself assignments to go a bit further each time. Slowly, but surely, your confidence with women will build.

I promise you will find that women are not that frightening.

Most will respond positively to a confident, high-value, socially calibrated guy.

And many will respond positively even if you have a clunky open that isn’t super smooth.

When I first started learning game decades ago, I read that a girl either liked you or she didn’t. If she liked you, your job was to not mess it up. To not show low-value behaviors.

With this nonsense in mind, I played it safe because I thought that would inhibit low-value behaviors like neediness.

Turns out the opposite is true. Playing it safe is as low-value as it gets.

I was terrified at first. Even too scared to touch a girl, who clearly liked me, on her shoulder, fearing a negative reaction.

One technique was to touch her shoulder and if she was cool with that, next I would touch her wrist then her arm and so on.

Getting physical in “safe ways” worked.

Kissing the girl is a big part of physical escalation and an even bigger sticking point for a lot of guys.

I had the same problem.

In college, I went on a few dates with a hot girl who was into me but I never worked up the courage to kiss her.

She was done waiting after the third date.

She ended up with another guy who had been cut from the college soccer team I was on, a guy my teammates and I considered a scrub.

I again realized that not escalating simply wasn’t working, so the only other option was taking action.

The next time I went on a date, I gave myself an ultimatum.

Before the date was over, I was going to try to kiss this girl.

At the end of the date, just as she was closing her car door to leave, I leaned and we kissed.

Let’s just say things worked out from there.

If it’s on, the girl WANTS YOU to escalate. She’s on a romantic date with you. A kiss is part of what’s supposed to happen assuming everything else goes well.

If things are going well and you don’t go for it, it probably won’t just magically happen.

Being too timid about physical escalation, especially when the girl is giving you clear signals, just makes her think that you don’t know what you’re doing.

It’s an instant value killer. Cut it out. 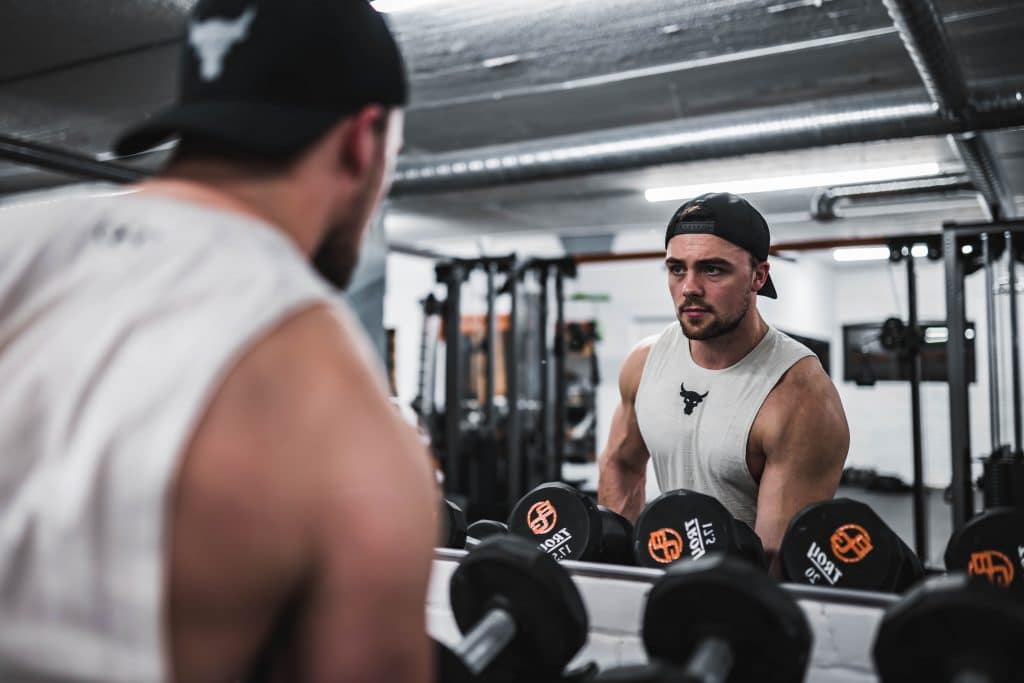 Whether your goal is a one-night-stand or a lasting relationship, sex is most likely going to be part of the equation.

Yes, this means being naked in front of another person.

If that’s something you’re uncomfortable with, you’re not alone. I felt the same way.

But to reach your goals, you’ll have to do what I did.

It’s easier said than done, but you have to realize that it’s a NECESSARY EVIL.

Being a soccer player, I was in decent shape in college.

My bigger issue was the acne I had on my chest and back. Plus, I was pretty pale.

I was body shy and afraid of being sexual on a certain level because I didn’t want to take my clothes off.

I don’t think I need to explain why that’s a low-value habit.

After escalating physically with girls, I realized we would always end up at the same place.

Being seen without clothes was INEVITABLE.

What other choice did I have? Once I accepted it as a necessary evil, I actually felt more confident about my body.

Plus, women who were into me didn’t care about my insecurities nearly as much as I did.

There are some exceptions.

Those who are in particularly poor physical shape or have bad personal hygiene shouldn’t just accept things as they are.

If you suspect you may be one of those people, focus on bettering yourself. There’s plenty of resources online to deal with any real issue you might be having. Whether it’s style guides, or fitness workouts, or skincare tips. If things are really bad or you just want to accelerate the process, find a coach that can help you reach your goals.

These are all solvable problems.

That being said, realize that you don’t need to have a body like prime Arnold Schwarzenegger to be attractive to women without clothes on.

4. Realize that Self-Doubt is Not Helping You

Another low-value habit many guys struggle with is being way too timid and assuming things that aren’t true.

Timidity manifests itself in guys cutting interactions short – asking for numbers and leaving the set when things were going great.

Don’t deny yourself the success you could have had if you just kept going and stuck it out.

Guys do this because they feel uncomfortable when an interaction is going well.

They think, “This is awesome, I don’t want to mess it up.”

Being afraid of messing up good sets KILLS whatever results you might have had.

That’s because good game requires taking risks which will always contain the possibility of messing up.

Mistakes happen. Things don’t always work out. These things are a necessary evil of game.

Playing not-to-lose is an inherently low-value habit and women judge you for it.

Play offense, play to win, and stay in the game.

Unless things are going horribly wrong, the longer you remain in an interaction, the better the chance of success.

5. Abrasiveness is NOT Attractive

The opposite of timidity is just as problematic.

I constantly see guys being too abrasive towards women in an attempt to seem high-value.

There’s a difference between teasing and being mean. The former is an inherently attractive quality, especially to hotter girls who are used to guys supplicating to them.

Being cocky can also be high-value but that value can fall off a cliff if you come off as a jerk.

Being a complete asshole should NOT be your go-to frame.

Subconsciously, you may be choosing to be abrasive because you want to reject the girl before she rejects you.

Even worse, some guys will try to find flaws in beautiful women so they have a reason to not approach them. In reality, they’re just afraid of rejection.

This all stems from a low-value mentality.

Remember, a girl’s approval or disapproval of you is NOT a reflection of who you are as a person.

Being rejected DOES NOT lower your value.

If you can mentally separate HER REACTION from YOUR VALUE, you’ll stop rejecting girls out of a fear of being rejected yourself.

Not to mention that being a jerk flat out doesn’t work in the long-term because a relationship of any kind must be a win-win.

If you’re constantly pushing women away, you’re not being high-value.

You’re actually moving in the opposite direction of where you want to be going.

If any of these habits sound familiar, you have to put in the work to change them.

Most low-value habits stem from a low-value mindset.

The solution is to set your mind on what habits you want and how you intend to get them.

Then get after it. Even if it’s in small increments.

The beauty (and danger) of a habit is that after a while, you don’t have to think about it – you just do it.

You can start building these habits NOW.

For more insight into how to change your value proposition, and how to become a truly high value man, make sure to check out Value Masterclass.

I’ll be diving into habits, mindsets, and feedback loops in a major way. I hope you’ll be able to join me.