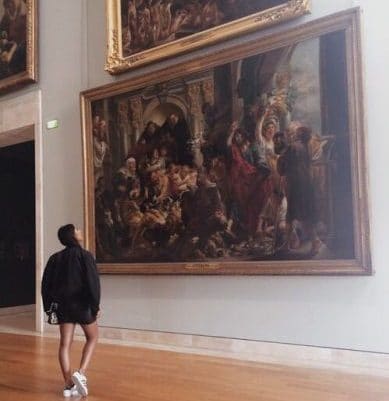 From the age of about 10 or 11 years old, I knew I wanted to be successful with women I admired. And from about the same age, I was a huge pussy about approaching. In another, possibly comical, article, perhaps I’ll recount some of my more embarrassing moments of making excuses and backing out during my teenage years, but today I want to talk about my first success. It was really lucky, but it’s an interesting story and it brings up some key points about game and approaching.

I was 17 years old and on a class trip in Spain. As the best Spanish speaker of the group, I was the designated “talk to strangers” person for the trip. I was also with a couple of guys who were just as afraid to talk to women, but just as willing to talk a good game, as I was. So I was basically dared to approach. I was lucky enough to have no choice!

She was an absolutely stunning and elegant olive-skinned girl looking at paintings in the Prado museum. The kind of girl every guy wants to approach, but nobody thinks they have a chance with.

I walked over, mustering as much bravado as I could, and told her, in Spanish, that of all the beautiful things in the museum, she was the one that caught my eye. Terribly cheesy line, I know, but I was bailed out by one simple fact. It was IN SPANISH… a language this girl didn’t speak! Turns out she was an American from New York.

So instead of being Mr. Super Nice Guy and giving away all of my power from the first sentence, instead, the girl was the one who was put on the back foot. She had to ask, embarrassed, if perhaps I spoke English? So, as it turns out, my approach seemed high value, and totally spontaneous as far as she was aware!

Her lack of understanding of Spanish, and subsequent nervous and flustered reaction, not only served to put me on the front foot in the interaction but it also completely erased whatever script I’d had in my head and forced me to rely on my natural conversational habits rather than the persona I would put on around hot girls. I see the same thing with students all the time. When something surprising happens, it throws off all of their preplanned, ineffective behaviors, and instead forces their brain to get present and pay attention to the girl in front of them.

Seeing her flustered filled me with relief and confidence and allowed me to joke that I “suppose I could try to speak English with her.” The rest of the interaction was relatively boring and get-to-know-you, but the initial frame had been established, and she was the one doing the work. I ended up getting her contact information and sauntering back to my disbelieving friends feeling twice my original size.

One of my first ever cold approaches and my first ever success. Thank you to my dickhead friends who sent me over hoping I’d fail. Thank you to the elegant girl for not speaking Spanish. And thank you to the trip for getting me in a conversational mood with the adventurousness that only comes out while traveling. I think I would have managed to get good at pickup in any case (as I was deeply motivated by women), but a little early success certainly greased the wheels and led me to believe that the “impossible dream” was possible.