You know everything about one another. Her favorite foods. Astrology signs. Childhood pets.

She has no idea why you’re talking to her in the first place.

All that time spent getting to know her without making it man-to-woman will, at best, get her warmed up for some other guy to swoop in and actually make a move.

Thankfully, you’re not alone. Many guys struggle with the problem of not being able to establish premise in a conversation. That’s because most guys don’t understand what premise is, why it is important, and why it is a far superior tool compared to just showing blatant direct intent.

But what’s even the difference between the two?

Let’s dive into the verbal game of premise. The key to sparking attraction and romantic possibility in any conversation.

THE DIFFERENCE BETWEEN PREMISE AND INTENT

The short of it: Both intent and premise tell the girl that you are interested in establishing SOME FORM OF A RELATIONSHIP with her beyond the current neutral conversation.

Whether you’re looking to make her a friend, girlfriend or hook up buddy, both premise and intent highlight a reason for the interaction to continue and progress. The crucial “why are we even talking?”

It’s also a major step in moving the interaction out of the platonic zone.

For decades, the only way taught that accomplished this was to show direct intent. By blatantly complimenting the girl within seconds of meeting her. Or saying things as massively intentful as “Hey, I think you’re beautiful and I wanted to meet you.”

Now, in and of itself, this approach isn’t “BAD” for some guys. It can even work once in a while.

In fact, showing direct intent may actually be a useful strategy for BEGINNERS because it is the easiest way to establish a blatant sexual premise. A way for guys that aren’t used to showing ANY intent, and getting into platonic conversations to nowhere, to immediately fix that behavior. You tell the girl you like her and that’s already a major step forward for a lot of guys.

However, direct intent has a lot of drawbacks. Especially for guys that have already had some success and want to reach a higher level. Specifically, when delivering direct intent, most guys come on way too strong and give their power away before they’ve built any value whatsoever. This leads to immediate rejections and you giving your power away in a matter of seconds. It also leads to conversations where the girl isn’t fully bought in and is somewhat skeptical of you. Direct intent generally doesn’t work very well on already highly validated girls that get approached a lot.

But there is a better way…

WHY PREMISE IS KING

Anyone who wants to improve their game past beginner and intermediate results needs to break out of the direct intent mentality. The best way to do this is to consistently establish a purpose for the interaction in a way that doesn’t give your power away, but still lets the girl know you’re interested.

Ideally, this is done in a more subtle and flirty way that doesn’t put the girl on such a high pedestal.

And that’s the difference between intent and premise.

Premise is not just brazenly showing interest. Premise is establishing a possibility of a relationship between you and the girl going forward. A possibility that the girl feels comfortable and excited about.

Girls want to feel that a connection happened naturally. They don’t want to feel like it was forced upon them nor easily given to them without working for it.

The truth is that the neediness of most direct approaches simply alienates a good percentage of women. Whereas a more flirtatious, subtle method works way better because it is precisely calibrated to how women want to be approached. This kind of approach makes women see you as the prize they very much want to win, instead of the other way around.

So what are the best ways to establish premise?

Here are five of my go-to premise moves…

1. Give Her a Non-Physical Compliment 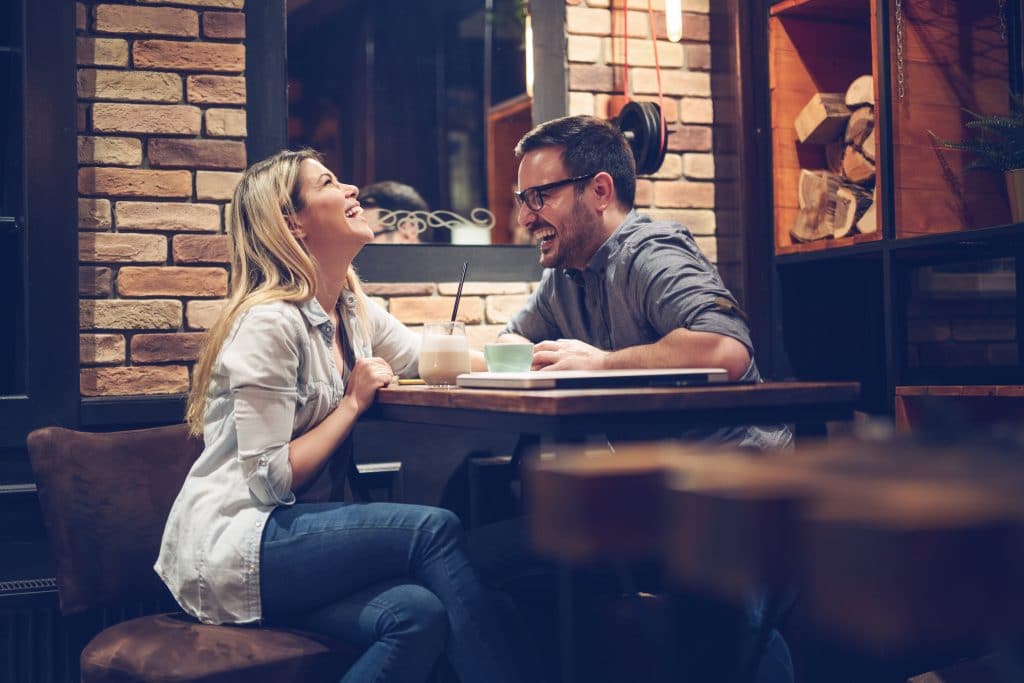 While a beginner may make a conversation man-to-woman by throwing a flattering physical compliment her way. Something related to her looks. A better way to establish premise is by giving her a softer, less obvious compliment.

“Your accent is really interesting.”

Instead of falling all over the girl from the get-go, you’re just lightly hinting at the fact that you find something about her attractive and that the possibility for a connection exists.

Notice that a general compliment is NOT about her face, body nor sexual appeal in any way.

Everybody likes to be complimented, but compliments in game should be used tactically so as to not come off as needy or of low value.

Giving her a general, non-physical compliment does just that.

As we know, showing intent is the most direct form of premise possible. Heavy compliments show extremely high premise but contain zero subtlety or nuance and therefore can come off as unattractive to the girl.

What if, however, you made an intent-like statement as a joke?

For example, let’s say you’ve been talking to a girl at the bar for a little bit and you ask her what her favorite drink is. Maybe she responds by saying “Jack and Coke”.

With a PLAYFUL tone and a smirk on your face, you could say, “Wow, you have the most refined tastes. Do I propose now or should we wait a couple days?”

Normally, just flatly saying “We’re meant to be” out of the blue would be way too direct. However, if you say it in a joking way, it conveys the possibility of a relationship between the two of you without actually meaning it.

The playful banter of “you and her together” is a major component of fun and playful flirting.

And a pretty good way to get out of the platonic zone.

Any guy can give a girl a positive compliment. But far fewer know that pairing it with a PLAYFUL, subtly negative comment can actually help their cause.

The compliment establishes premise while the negative comment tempers things a bit.

It lets her know she hasn’t quite won you over.

If you’ve started a conversation with a girl and she says something that you even slightly disagree with, you can respond by saying, “I liked you until you said that” or “you had me until you just said that.”

Here, you are creating a reason for the conversation, and that you’re potentially interested in a relationship, but then creating some sexual tension by pulling it away.

This verbal tactic develops more intrigue and investment between you and the girl. Throw in a couple of push-pulls and you may be able to substantially increase the sexual tension in a matter of seconds. The girl now has a reason to prove herself and to work for the attraction that you’ve presented to her.

Suddenly, we’re light-years away from the problems of direct intent.

But with a ton of upside.

For the record: The push-pull is one of my FAVORITE ways of establishing premise because it is simple, yet super effective.

It’s also an easy way for beginners to improve. A lot of newbie guys who are actively approaching are used to throwing compliments at girls. So simply adding a negative to the end of that statement sharpens your verbal game in a significant way.

This should be obvious but when adding your negative statement, make sure it is NOT SOMETHING OBJECTIVELY MEAN. There is a significant difference between a light, playful tease and saying something blatantly mean.

Negative comments about a girl’s appearance that she cannot change are to be avoided at all costs. The point of the push-pull is to create fun tension, to instigate and be flirtatious, not to be a jerk.

4. Premise in the Negative

Not only does establishing premise in the negative allow you to maintain a position of high value, but it may actually increase your value in the interaction.

Telling a girl “I love you” is the most obvious and least sexually intriguing way of offering the possibility of a relationship to a girl.

Playfully telling a girl “I HATE YOU” establishes that one of the reasons for the interaction occurring in the first place is to determine whether or not you like one another.

A softer way of establishing premise in the negative would be to say “I’m not so sure I like you.” Again, playfully.

This approach gives away zero power. It may even increase her perception of you in her eyes, especially if she responds by qualifying herself.

Most importantly, it makes it clear that the purpose of the communication is to evaluate one another for some form of a relationship in the future.

Again, use common sense so that any negative statements come off in a relatively harmless and playful way. If premise in the negative comes off as harsh and mean, you’re doing it wrong.

Premise in the negative can also be used in a sexual light.

This can be achieved by saying things like: “Wow, there is no way you’re getting in my pants tonight.”

In this scenario, the negative premise implies that the purpose of the conversation is to decide whether or not to sleep with each other. Simply put, it makes it fun and flirty.

Instead of a man-to-woman push-pull that is directly about the girl or your relationship to her, the general push-pull combines a less direct push with a pull.

You could also say something like “You’re pretty funny, did you look up these jokes before you came out tonight?”

This kind of statement is more subtle, and a little socially safer, but therefore establishes less premise than the man-to-woman push pull.

How to Think About Premise…

These five examples can be interspersed throughout an interaction to inject premise and spark attraction into any conversation.

One quick note before we wrap up: The earlier in an interaction you establish premise, the better.

At the end of the day, no matter how much you talk to a girl, if you do not establish premise, the conversation will go nowhere.

Last, but not least, if you’re interested in more verbal game like this, check out my upcoming course, Verbal Game Academy.

I’ll be going into crazy depth on anything and everything related to flirtation, conversation and building attraction so stay tuned.